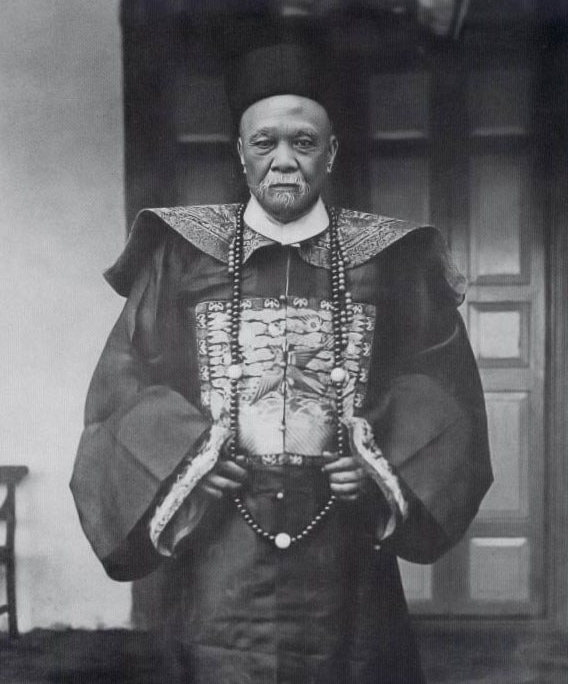 In 1846, the ownership of the mansion transferred to Chung Keng Kwee (traditional Chinese: 鄭景貴; simplified Chinese: 郑景贵; pinyin: Zhèng Jǐngguì) a business titan in his own right who would come to single-handedly control most of Perak’s tin industry— a raw material that was the key driver of economic development in Malaya.

Today, there are two streets in George Town named after Chung Keng Kwee— Lebuh Ah Quee and Lebuh Keng Kwee19— giving us some indication of the significance of his legacy. Beyond his contributions to economic development, Chung was a philanthropist and played a key role in uniting the warring factions within the Chinese community, even establishing the first school that accepted students from all Chinese dialect groups. Simply put, it is thanks to him that the Chinese migrants began to have access to education for their children.

Chung Keng Kwee was the third of five sons born into a Hakka peasant family in Guangdong Province, China. While Keng Kwee was still young, his father had come to Malaya to find work. After a period of time, hearing no news from her husband, Keng Kwee’s mother sent her second son to Malaya to look for him. However, he, too, vanished without a trace. When Keng Kwee was around 20 years old, his mother sent him to find her missing husband and son. It is believed that Keng Kwee boarded a junk boat and left Guangdong in 1841.

Upon his arrival in Perak, Keng Kwee discovered that his father and brother had become well- established in the mining business and subsequently joined them. At the time, Penang was the closest port city to Perak, and there were close business linkages between the two places. In fact, the export of tin eventually became Penang’s competitive advantage over its rival port of Singapore in the 1850s.

By the 1860s, Chung Keng Kwee had risen the ranks to become the leader of Penang’s Hai San (海山) society, dominated by the Hakka. The Hai San group also dominated the tin mines of Larut, Perak. As leader of the group, Chung had over 15,000 coolies under his control. The sheer number Hakka coolies in Malaya at the time can be attributed to the Taiping Rebellion which broke out in China, leading many to flee.

But this led to an intensification of the tensions already brewing between the Hai San group and its rival Ghee Hin. Skirmishes between the two groups had broken out across Selangor, Penang and Singapore, eventually reaching a boiling point and spilling over into the Larut mines. What initially began as a conflict over land and water rights became known as the Larut Wars, which lasted between 1861 and 1874.

Chung’s home on No. 25 China Street was no stranger to the cut-throat tensions that loomed over these decades. The mansion had secret passageways for escape in the event of attacks.

As the war went on, the halt in the production of tin began to harm the economy, and the British, out of necessity, decided to intercede and mediate peace between the two Chinese factions. This resulted in the signing of the Treaty of Pangkor in 1874. Chung Keng Kwee was one of the two major signatories to this treaty, representing 26 headmen of Chinese Secret Societies. As part of this treaty, the town of Larut was renamed Taiping (太平), meaning “everlasting peace”. Later, Keng Kwee was appointed onto the Commission for the Pacification of Larut, along with his Ghee Hin counterpart Chin Seng Yam, and other British officials. Through this commission, the mines in Larut was divided between the two groups amicably, and the leaders of both Chinese factions were granted the title “Kapitan Cina” for Perak.

By the 1880s, Chung Keng Kwee was the largest producer of tin in Perak, and his output exceeded the output of all the foreign mines put together. His mine, run under the Kong Loon Kongsi, was known for its willingness to adopt emerging new technologies. In particular, his mine was noted for replacing the traditional Chinese water-wheel with European hydraulic machinery, significantly increasing productivity.

Although primarily known as a tin tycoon, Chung Keng Kwee also made his fortune in other industries like tobacco and opium. He also greatly benefitted from the revenue farming system imposed by the British at the time. According to this system, land owners paid a fixed annual sum to the British but were entitled to all profits and taxes from the yields23. As a result of his exceptional management skills, Chung Keng Kwee quickly rose to become one of the largest financiers of his time.

But Chung Keng Kwee was more than just a tycoon or successful capitalist. He was also the most generous philanthropist of his time, and has been called the “century’s biggest patron of all”. His contributions accounted for more than 90% of all charitable donations made by the Cantonese-Hakka economic elite between 1850 to 1910.

Although his most enduring legacy are his contributions towards the preservation and development of Chinese cultural institutions such as temples, schools, cemeteries and associations like the Penang Chinese Town Hall, he was also globally minded and donated to

international charities such as the India Famine Relief Fund, the Transvaal War Fund and the Franco-Annam War Relief Fund.

Chung Keng Kwee also supported the field of innovation and engineering that he so greatly benefited from in his businesses. Aware of the value of collaboration and knowledge exchange to innovation, he donated a two-storey building located at the junction of Leith and Farquhar Street to the first ever Engineers’ Institute. The space was used as a recreational facility for engineers, mechanics, deck offers and longshoremen.

He also maintained close ties with his hometown in China, and as a tribute to his mother founded an endowment there to support poor students studying for the civil service examinations. In 1894, in honor of his outstanding achievements and philanthropy, the imperial government of China’s Manchu Qing Dynasty bestowed on Chung Keng Kwee the title of “Mandarin, Second Rank”. So great was the honor of this title that it carried a retrospective title for three generations. Consequently, both his father and grandfather were also posthumously endowed with this title. Set within the intergenerational context of Chinese identity and the spiritual significance of honoring one’s ancestors, this title was truly a great recognition.

The important role of symbolism in Chinese culture was also not lost on Chung Keng Kwee, especially as he aged. In 1893, then already in his 70s, he purchased two adjacent properties along Church Street. The first property was the former headquarters of Ghee Hin, and the second was a Chinese School known was the Five Luck Villa (五福堂). He offered the school an alternative plot on Chulia Street and a new building was completed in 1898. He then set out to convert these two properties into his townhouse and office, naming it Hye Kee Chan (海海记栈). Today, this property is better known as the Penang Peranakan Mansion, and is one the most opulent mansions ever built in Penang’s history. By constructing an homage to his success on the former site of the Ghee Hin headquarters, it is as though Chung Keng Kwee had the last laugh against his bitter rivals. After all, he lost his entire fortune in the Larut Wars, but like a phoenix, arose from its ashes and died one of the wealthiest Chinese men in the world.

Chung Keng Kwee is laid to rest in the Chung Family Burial Plot on Mount Erskine. His tomb was the largest Chinese tomb in the country and the only one to have four life-sized statues— an honor reserved only for the highest ranking Chinese mandarins.

The Development of the Tin Mining Industry of Malaya By Yat Hoong Yip Published by University of Malaya Press, 1969